Gondola is a cooperative card game using a subset of a standard deck of playing cards using only the ace, 2-7, Jack, King, and Queen.

It is played in rounds, each of which have two phases (Loading and Delivery). A standard game of Gondola ends after three rounds, while a long game (called a double-shift) ends after six rounds.

The Loading Phase is similar to a game of Blackjack or Pontoon in which the players are trying to get a total value of 13 without going over. The Delivery Phase involves a  cooperative scoring of points.

The players of Gondola are the Gondolieri, taking the place of the legendary canal-traversing figures of Pentola, singers of abjuring ballads and destroyers of the demons who lurk in the city’s waters. Those demons are represented by the Wakemaker, who is the dealer.

Note: This game offers an optional 50% discount for members of marginalized communities. No questions, no judgement. Click here to opt in.

The pamphlet is a print-and-play product with dotted lines on it to indicate where to fold - with the interior spread face up (it has the score sheet on the right), fold the right-third inward along the dotted line. This should now display the Loading Phase and the Cards and Value pages. Fold the left panel (Loading Phase) inward. You should now see the front cover.

The digital version does not include a score sheet but you can copy this one to your own google drive if you prefer a digital score sheet.

Gondola is a two-page cooperative/competitive card game with lovely art and layout.

You play as gondolieri loading cargo aboard your gondolas, with the help of your familia. Mechanically, it plays like blackjack---you're trying to load within a set number of cards/points---but also scores like poker, with the exact combination of cards in your gondola giving you multipliers.

A lot of the mechanics feel geared towards competition, and there's rules for gaining coin (the value of the cargo you successfully turn in) and reputation (the value of the cargo that you give to other people) but the game takes a strange turn at the end and no one wins or loses based on coin. Instead you score the group based on total coin accumulated, with a commendation going to the player who accumulated the most rep.

This takes a fair bit of tension out of the game, but it does make for a very interesting experience, as it gives the game a much more distinct sense of belonging to its in-universe culture.

Overall, Gondola is a neat card game that I can see working both as a bit of color in another fantasy rpg's campaign, or by itself as a low-key score-attack game to play while the group's still arriving. It's explained well, it has a clever concept, and I think there's potential for modding it into a minigame too. If you look cooperative card games, or you want a card game that teaches cooperative gameplay despite feeling initially competitive, I would highly suggest checking Gondola out.

-If everyone loads until they overload, the Wakemaker has a good chance of overfeeding, which makes group-overloading the optimal strategy. It also makes it possible for the Wakemaker to both overfeed and have a cargo total higher than at least one Gondolier, making it unclear which rule applies. 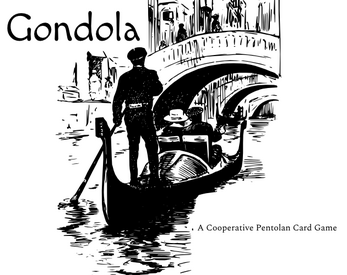